Citi Indonesia Board of Directors 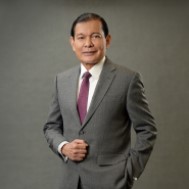 Previously, Batara was Chief Executive Officer for Citi Philippines. He concurrently served as Citi Regional Head for the Philippines and Guam. Prior to his Philippine assignment, he was the Chief Executive Officer for Citi Hungary as well as the Regional Head for 12 other countries in Eastern Europe. During his 27 years with Citi, he has held a number of senior positions namely marketing Director, Retail Banking Director and Consumer Bank – Chief Financial Officer (CFO). Citi appointed Cristina Teh Tan as Head of Consumer Banking for Citibank N.A., Indonesia in August 2017.

Cristina has been dedicating the last 20 years of her career in the banking sector. She joined Citi from Unilever in 1998 and since then she has held a variety of senior roles in the Philippines in addition to Head of Consumer Banking including Cards Head, Planning Head and Cards Acquisition Head.

Cristina graduated from De La Salle University with a Bachelor’s degree in Commerce, majoring in Economics and Business Management. Franziska Wagiu was appointed as Head of Markets and Securities Services for Citi Indonesia in March 2018.

Franziska has been dedicating the last 20 years of her career in the banking sector. She started her career as a management trainee in Deutsche Bank Indonesia, before joining Citi Indonesia on July 2016 as Deputy Head of Markets and Securities Services.

Franziska holds a Master of Commerce in Finance from The University of New South Wales (UNSW) and a Bachelor’s degree in Accounting from Philippine Union College. She is also a permanent committee member of the Indonesia Foreign Exchange Markets Committe (IFEMC).

Citi appointed Sharat Rangraj Mavinker as Head of Operations and Technology for Citi Indonesia in March, 2019.

Sharat started his career with Citi as a Management Associate and brought to the role 30 years of experience across a number of functions and geographies in Asia, EMEA and the Americas. Most recently, he was the Regional Financial Intelligence Unit (APAC FIU) Hubs Head and CEO of Citigroup Transaction Services Malaysia Berhad, where he led a team of over 1,000 AML operations staff across the region, in support of the bank’s AML policies and regulatory expectations. Sharat previously served as the Asia Regional Head for Credit Operations and Collections where he led the region’s efforts through the 2008-9 financial crisis, working with business leaders to mitigate Citi’s credit losses and providing appropriate financial solutions to customers. In prior roles, he led the bank’s system convergence efforts for a number of countries in Asia/Middle East and the regional Consumer Core Operations team. He has worked in India, Indonesia, Singapore, Egypt, Spain, the UK, USA and Malaysia.